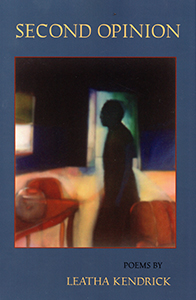 Buy from David Robert books
Order from an independent bookstore; find on Indiebound
Buy from Amazon

The poems of Leatha Kendrick’s Second Opinion are tender in many senses: warm in their gathering of memory, painful in their confrontation of mortality. Through sound and feeling, Kendrick’s skillful lyrics enlarge our connectedness.

“In her shining new poems, at once sensual and tough-minded, Leatha Kendrick heads straight for the best subjects of poetry: love and loss. She writes at the height of her powers, with urgency–and wonder. The poems in Second Opinion are crammed with the marvelous details of childhood learning, domestic life, illness and health. Although they sharply observe the world, these exciting poems are born of interior moods, sparked by memory, fueled by crisis, and filled with awe.”—Molly Peacock

“Leatha Kendrick writes about desire more honestly than any poet I know. The central section of Second Opinion–forthrightly addressing her cancer, in lucid and memorable ways–is breathtaking, but that ‘buried bomb’ is counterbalanced by the poet’s appetite for the pleasures of this world, by ‘the instinct to hold life close.’ ‘Desire,’ she writes, is ‘a Magritte engine / roaring straight out of / that hearth, my heart,’ and she eloquently yearns for family, for places left behind, for the lover’s touch that can transform any body into ‘a blossoming hide.’ Nobody celebrates everyday details more vividly than her, down to ‘the deep / peace of our feet touching / as we sleep’: ‘What I can believe in,’ Kendrick says of her daughters, at the conclusion of the title poem, ‘is the healing of their fingers laced through mine.’”—Michael McFee

“In the poem ‘What I’d Give Her,’ Leatha Kendrick warns us, ‘Don’t refuse the joy of telling / what you see…’ The poet certainly takes that advice to heart in this wonderful collection. Kendrick’s poems capture what she sees with directness and energy, in addition to craftsmanship, wordplay, and a fine, self-deprecating sense of humor. Especially powerful is the series of poems about her experience with breast cancer, culminating with the insight, ‘The map back is a flat / red road, underpinned with bone, she must take her reckonings upon.’ Loss and regret may play roles in Leatha Kendrick’s work, but the energy that suffuses every one of these poems is love.”—Jack Coulehan

“Leatha Kendrick’s poems speak in her true and particular voice of the complexities, and simplicities, of a woman’s life. Her rigorous sense of form both controls and magnifies the passion that energizes her work. While the poems about confronting breast cancer are at the heart of Second Opinion, Kendrick also explores the fleshly realities of family bonds with daughters, mother, husband, sister, all those flawed dynamics that comprise a life. Kendrick’s poems are vividly, drastically human.”—Jane Gentry Vance

From NYU’s Literature, Arts, Medicine Database:
Summary:
Poet Leatha Kendrick is the author of two chapbooks, Science in Your Own Back Yard and Heart Cake. In this full-length collection she continues to examine themes explored in her first titles: love and loss; the fleeting of time; and her personal experience of breast cancer. Second Opinion is divided into three sections: the first two sections have 14 poems each, the final section has 13, perhaps to indicate that for this passionate and articulate poet the the final poem is yet to be written. The first poem in the collection, “A lesson in Love Unleashed,” sets the theme for the poems that follow: “yes, I think, even in their distorted flesh, / I still desire what’s gone. What I’m leaving” (p. 3). In the first and third sections, the poet writes of marital and familial trials and triumphs, both past and present, and in the second section–for me the most vivid in the collection–she writes about breast cancer and how this experience weaves in and out of her other loves and losses. This weaving is given both visual and emotional expression in the poem “Tonight Weaving” (p. 28)

Throughout the book, Kendrick’s poems take varying forms and tones, and yet there is always the assurance of a constant voice–personal, passionate and often humorous. In the second section, the poems become more visually complex and fractured, poetic representation of the “distortion” of the flesh as the narrator considers the diagnosis and treatment of her breast cancer. In this section’s opening poem, “The Calculus of a Cracked Cup,” the poet writes, “Our position is never certain, only our / velocity” (p. 27), adding the concern of the swift passing of time to the collection’s overall theme. In “Second Opinion,” the title poem, she notes, “I want to believe in sudden remission, / in some way to avert what we are certainly / headed for” (p. 34). But while time rushes on, the reality of cancer, the loss of a breast becomes a “stopped surface” under which a “lost life” wants “its old course, not subject to IVs or a knife” (p. 35).

It is life–difficult and sweet–that is ultimately celebrated in these poems and that overcomes the losses. The most wry poems are found in the breast cancer section: “Christmas, Adolescence, Yin and Yang” (p. 32) is a sort of ode to “Skeeter and Bite,” so named by a first love; now “they’ll lift / one out, the eye sewn shut by mastectomy.” “Costume. Fakery. The Sell.” is a tough, nervy poem that has the narrator claiming acceptance for who she is, post surgery: “Alive! Tender, I’m not hiding” (p. 39). Throughout the book there is a subtle triple play on the word “tender”: woman as caregiver; woman as collateral in a society that values cleavage; and woman as injured, post op, and physically vulnerable.

In the collection’s final poem, “What You Leave Me,” the theme of love and loss balanced against time comes to some resolution as the narrator and her partner join in a “sweet tangle”: “the blossoming / hide, this bounded / time against brevity” (p. 64).

Commentary:
This collection, in particular the interplay of family love and loss against the cancer poems in the second section, will be of interest to caregivers, patients, family and writers. While the themes in this book are serious and the poems personal, there is no bogging down in grief or pure confessionalism. The poems transcend the narrator’s experience to reach a universal audience. The poet seems to have great interest in language as a vehicle both of music and meaning. Read carefully, the poems reveal words with multiple interpretations, a diversity enhanced by the poet’s choice of line break and line placement. Read first one way, a line may then be read another way, turning the poem’s obvious meaning upside down–as the diagnosis of cancer might start both patient and family spinning.

What falls away is always. And is near.

Nothing speaks from the next room.

It is past – the high pitch of it,

the words still soft around the edges,

lopsided, taking shape. The lean fingers of it,

the pudgy palms and bare feet

on stairs – they are away. And always

falls down skins a knee, leaves for college.

Go home, I think – but where? I think it

in my car while in the city or in the house

we built on a hillside twenty years gone now.

Everywhere’s a motel, I think – even trees

I can’t see—this tree next to my window—

and my window moves out of then

to no place past now. Still it moves.

You can’t get ahead of yourself,

though the mind’s eye will strain

to make out landscapes way out there. Nothing

speaks or giggles or cries out from these

places we are leaving.

We’re four women waiting among a shifting set of others

and a mother linked by blood and laughter

over Cosmo Girl’s “most embarrassing

moments” (trail of toilet paper from the back of slacks,

a student asking her teacher, “If your quizzies are hard,

what about your testes?”) Lyda loves that last one–

my funny last one–she’s the performer, the mime.

The middle one, Eliza, brought my x-rays here,

and parked the car. She works the crossword,

all attention like her father but she’s part of me,

my watching self. And Leslie, eldest, watches over us all,

rails against this three hour wait, tries to breach

the impersonal walls of disinterest in our fate. She was first

to nurse from this right breast, that pressed and prodded,

and later slicked with gel will echo sound onto a screen

to show the probable malignancy. I’m going to lose it–

the breast–and along with it the cancer, too, I hope.

The receptionist gives us a hard look when we laugh.

We’re linked, silvery with a happiness

glinting out even in this waiting place.

I want to believe in sudden remission,

in some way to avert what we are certainly

headed for. What I can believe in

is the healing of their fingers laced through mine.

First published in The Voice of Breast Cancer in Medicine and Bioethics, 2006.

Excuse me while I grow bald and fat.

Sorry to offend the eye with my

one breast. I’m female. I apologize.

I fake two breasts, but know this half-flat

touch my losses secretly. No big

deal! I never have and never will

and silicone help to hide the scar.

I’m served up on the half-shell. Turn off

the TV. Its cleavage shouts, “Are you buying?”

Avert your eyes. I’ve one soft side. I’m off

Reprinted in The Voice of Breast Cancer in Medicine and Bioethics, 2006.