Science in Your Own Backyard 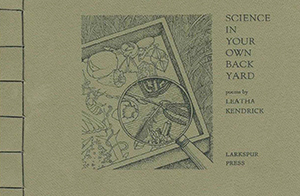 Science in Your Own Back Yard
Larkspur Press, 2003
Out of print
Buy used from Amazon

From NYU’s Literature, Arts, Medicine Database:
Summary:
This chapbook by Kentucky poet Leatha Kendrick features a sequence of poems dealing with her experience of breast cancer and mastectomy. The “science” in the title moves from a little girl’s fascination with nature, and her insight that “all she learned was nothing / is only what you thought you saw” (p. 2); through her mature view of “these spiky shadows” on ultrasound (p. 10); to chemotherapy, where she feels “like the muck this stuff is supposed to make of the fast- / dividing cells” (p.18).

But the science of cancer fails to amputate the poet’s narrative. Early on, “My first love called them Skeeter and Bite. / Equal then, if small. Skeeter got / most of his attention.” (p. 14) Later, during her treatment, “Excuse me while I grow bald and fat.” (p. 21) Eventually she learns, “The map back is a flat / red road, underpinned with bone, / she must learn to dance upon.” (p. 28).

Commentary
This is a fine collection, with several poems that might be compared favorably with selections from Marilyn Hacker’s Cancer Winter, Audre Lorde’s The Cancer Journals, and Alicia Ostriker’s The Mastectomy Poems. Poems of special literature and medicine interest in this collection include, “Second Opinion,” “Sonogram,” “Stopped,” “ChemoMath,” “Pear Tree Mastectomy,” and “Learn to Love What’s Left.” Probably the most striking and expressive poem is “Costume. Fakery. The Sell,” which combines anger, humor, insight, and self-confidence.

What falls away is always. And is near.

Nothing speaks from the next room.

It is past – the high pitch of it,

the words still soft around the edges,

lopsided, taking shape. The lean fingers of it,

the pudgy palms and bare feet

on stairs – they are away. And always

falls down skins a knee, leaves for college.

Go home, I think – but where? I think it

in my car while in the city or in the house

we built on a hillside twenty years gone now.

Everywhere’s a motel, I think – even trees

I can’t see—this tree next to my window—

and my window moves out of then

to no place past now. Still it moves.

You can’t get ahead of yourself,

though the mind’s eye will strain

to make out landscapes way out there. Nothing

speaks or giggles or cries out from these

places we are leaving.

Excuse me while I grow bald and fat.

Sorry to offend the eye with my

one breast. I’m female. I apologize.

I fake two breasts, but know this half-flat

touch my losses secretly. No big

deal! I never have and never will

and silicone help to hide the scar.

I’m served up on the half-shell. Turn off

the TV. Its cleavage shouts, “Are you buying?”

Avert your eyes. I’ve one soft side. I’m off

Reprinted in The Voice of Breast Cancer in Medicine and Bioethics, 2006.