Almanac of the Invisible 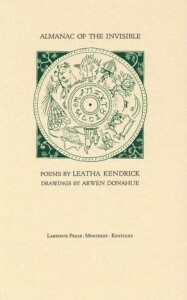 The poems in Almanac of the Invisible emerge from the place where many of us find ourselves — caregiver to aging parents and witness to the generation that will supplant and carry us forward. Rooted in farms, long gone or going away, these poems attend to stars and seasons, seeding and harvest.

Reviews & Awards
“This collection feeds that hunger for the unsweet, for the homely, substantial nutrients of the soul presented in an exquisitely crafted book of equally exquisite poems.”—Oregon Ferry

So much she does not know, now that she’s reached

the cusp of Age. Past the apex of that Renaissance

the ones she once rejected, so certain that

she had to stay the same. This spring she fights

like a Jenny Craig success. A sly grin lights

his face when the doctor’s scale edges

down and down – one seventeen – he fights

She thinks he wants to disappear, sick

of his crabbed reflection in the glass, the weight

of living. She’s relieved to leave him. The peace

of her own place, a balm broken

by a cardinal pecking at the window glass.

“That bird ought to put her strength

into making eggs,” a guest opines

on the second day. The woman thinks

of her unborn grandson, safe, reclining

in her daughter’s womb. When she calls

This man who named her world cannot recall

the name of the white flowers that star

his April lawn. All day the bird flies, full

force, at her double. Undeterred, far

from her abandoned nest. She’s young. She still

believes her image, its power

it to defend her space, though it is herself

she duels in truth. The shade she cannot still.

A weavery of stones, sand

between, and two curled leaves—

we stoop and aim.

the lens toward her toes and snaps.

take one of your foot.”

her foot, sandaled on the brick

and I zoom in.

echo of her laugh.